Every Direct to Consumer company does advertising a little differently. We’ve examined eight D2C companies that all share one thing in common: their one-of-a-kind approach to marketing and advertising has brought them lots of recognition, customers, and revenue.

Let’s examine these five Direct to Consumer e-Commerce companies and discuss what you can take away from their strategies. Whether you work for a D2C company or not, there are plenty of tangible marketing practices you can still try out for yourself.

Here are Those Direct to Consumer Brands That changes the game

No one can guarantee that a video will go viral. But it doesn’t hurt to have a strategy in place.

Dollar Shave Club, which sells — you guessed it — razors (among other bathroom essentials), launched their eCommerce company with a 1:33 minute video. Their video is wacky and memorable, with dance numbers, shaving babies, and a guy named Mike traipsing around a warehouse and making proclamations like, “Are the blades any good? No … our blades are f**ing great.”

The video was a huge success. In the first three months, it received 4.75 million views, and within the first two days of the company’s launch, 12,000 people had already signed up for Dollar Shave Club razors.

The video doesn’t come across like an advertisement, it seems like a funny video your brother’s goofy friend made in his garage — which probably explains why so many people sent it to friends and shared it on social media. But Dollar Shave Club didn’t rely on organic reach alone to promote their launch video.

Before promoting their video, Dollar Shave Club reached out to tech publications to let them know when it was going live, provided these publications early access to the video, edited a shorter version to run on late-night TV, and spent $10,000 promoting it on social media, among other things.

They didn’t just reach out to any tech publications, either — they focused on media properties already reaching the male demographic they wanted to target, like Thrillist and Uncrate.

Takeaway: It may not be feasible to aim for a viral video, but it is possible to create great content and use your money and other resources to market it to the right demographic. Hopefully, your audience will do the hard work there.

When I think of Glossier, I think of one word: accessible. The makeup and skincare industry can be a complicated, convoluted world to navigate. Glossier has simplified the approach to buying beauty products, both through their marketing and product design.

Glossier’s advertising has no pretense. For example, rather than working with influencers, the brand gave free products to 500 “superfans” who had purchased the most product or engaged the most with the brand.

The evidence of Glossier’s cult following reverberates across social media. Customers and employees alike share videos and images sampling their products and teaching viewers how to properly use them. Moreover, the brand encourages customers of every age, ethnicity, and gender to showcase their Glossier, making the brand accessible on multiple levels. 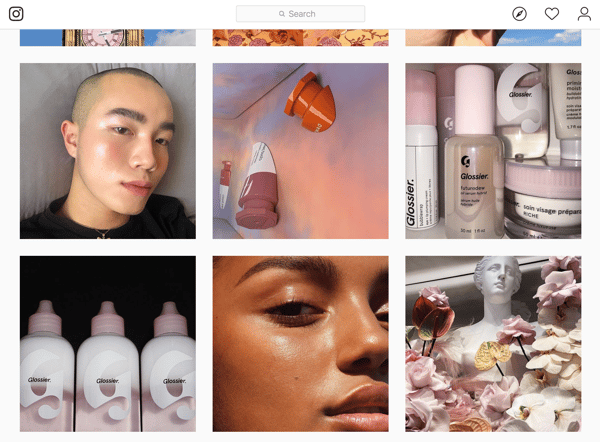 Whether customers are ordering from Glossier’s ecommerce site or visiting one of its popular pop-up shops, the experience is unforgettable. Shoppers receive Glossier stickers and the memorable Glossier Pink Pouch (which Glossier even sold on its own).

Takeaway: Glossier has created a loyal following and accessible, fresh shopping experience in a convoluted industry. The brand creates a customer experience that can’t help but be shared on social media, serving as both user-generated content and customer advocacy.

Warby Parker’s D2C model eliminates the hassle of shopping for eyeglasses by sending you multiple pairs and letting you return the ones you don’t like. The convenience of choosing eyeglasses in your own home is Warby Parker’s biggest selling point.

Warby Parker knew their customers were already taking pictures and videos of their glasses to send to friends for advice, so they started asking customers to post their images on social media with the hashtag #warbyhometryon … as a reward for posting, Warby Parker pairs those customers with one of their online personal stylists. Today, almost 25,000 people have posted with the Warby Parker hashtag on Instagram. 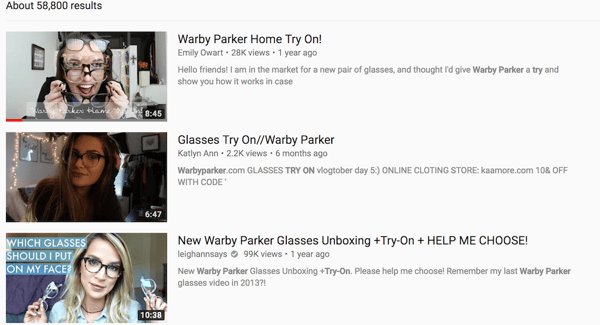 The company also pays YouTube influencers to post videos of themselves trying different Warby Parker glasses on. The tactic is popular — there are currently tens of thousands of results on YouTube for “Warby Parker try on”. More importantly, encouraging people to share their home try-on experiences on social media also makes consumers more likely to buy. Warby Parker found that customers who shared content online were 50% more likely to make the purchase.

Takeaway: The #Warbyhometryon marketing campaign succeeded by encouraging customers to promote something they were already doing — taking photos and videos of themselves trying on eyeglasses — on social media, a channel through which Warby knew could reach their millennial audience. This effort also naturally created a highly-impactful user-generated content campaign that boosted awareness of the Warby Parker brand through its customers. By tapping into natural behaviors, Warby Parker was able to introduce its products to new customers as well as boost conversions.

Julep, a monthly customizable subscription beauty box, released a female empowerment video called Throw Anything at Me. The video features a woman putting on Julep makeup and then tackling issues related to women’s rights. On Julep’s website, the ad is described as a “celebration, a rallying cry, championing every woman’s innate power”.

The ad briefly features a few Julep products, but it mainly focuses on the woman in the ad and the things being “thrown” at her. It also introduces a bit of humor through the text message blurbs, a falling man holding wine and winking, and stunned onlookers.

Along with the ad, Julep made a similarly-named video game in which consumers could act like the female in the video and engage with the ad while having fun. Moreover, it brought viewers directly to the Julep website where they’d hopefully shop for products or subscribe to the beauty box.

Takeaway: There are plenty of subscription beauty boxes out there. To differentiate themselves, Julep didn’t advertise what it was — it advertised what it stood for. It helped build a sense of trust and camaraderie between customers and the brand prior to asking them to make a purchase.

Cards Against Humanity, a sarcastic and taboo card game founded in 2011, understands their audience very well. And, if you know your audience well, you can break the rules.

I don’t know about you, but selling nothing sure seems like breaking the rules to me.

This strategy wouldn’t work for most companies, but it worked for Cards Against Humanity. The company knew their audience would pay attention, appreciate their sense of humor, and, pay for it.

Takeaway: While it may not be a good idea to sell anything, remember it’s okay to employ some stunts if you trust your audience will get it. Who knows? You may profit in the process.